At 17:09 on Saturday the 23. November, the gate of the last lock on the Panama Canal opened and Artemis of Lleyn entered the Pacific Ocean.

The previous Sunday we sailed to Colon, the port at the Atlantic end of the canal and on Monday morning we were visited by a canal official who checked the length of the boat, ensured our cleats were strong enough and asked if the toilet worked. The inspection didn’t take long, probably as there was lots of sun, no wind and baking temperatures in the boat.

On Tuesday we took a shuttle bus in to the seriously unsafe city of Colon and paid $1875 US in to the canals bank account. Hopefully we soon get the $900 deposit back so the transit will “only” have cost a thousand dollars. We also took the opportunity to do a quick shop and filled six bags with groceries. In the evening we called the Canal and agreed a transit date for Friday.

Wednesday we took a day off and went cycling to look at the canal. 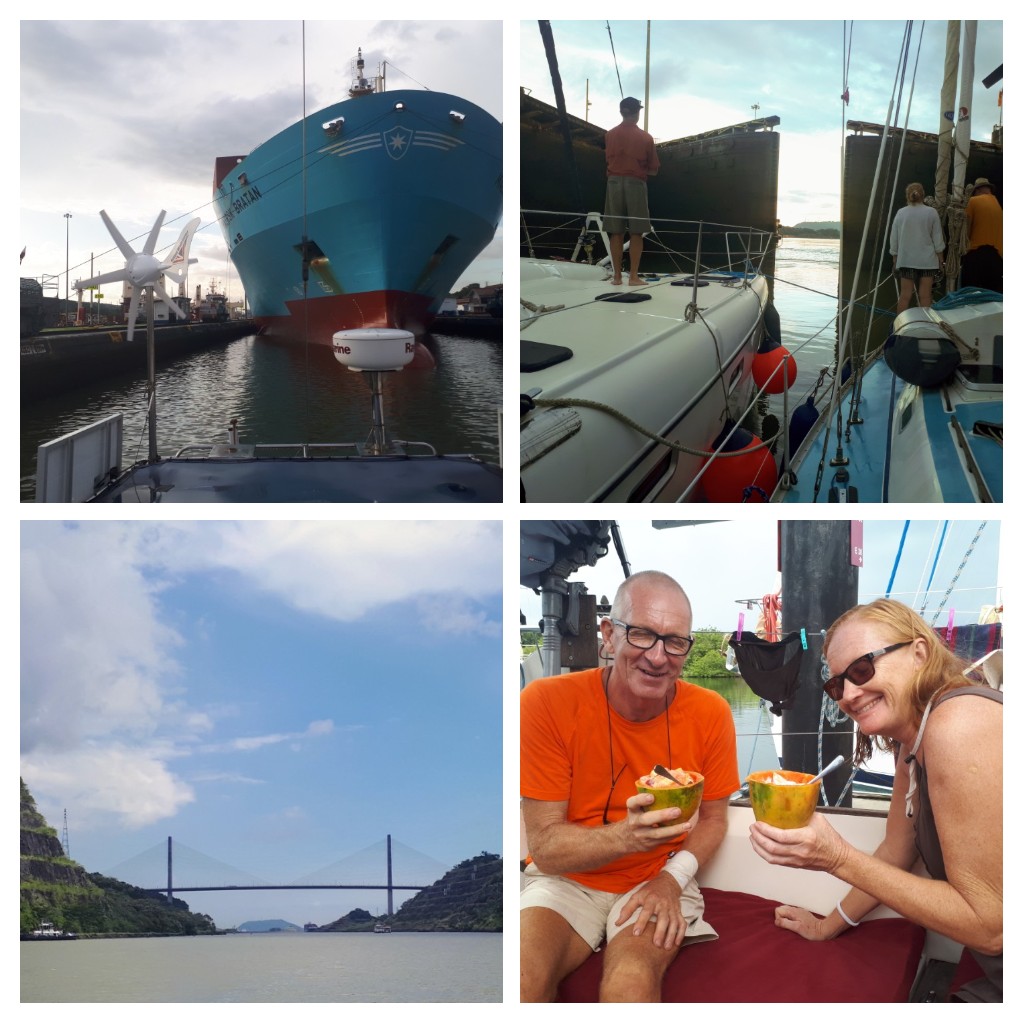 Thursday we bunkered fuel, water and a bit more – only four bags – shopping. In the evening we confirmed timings and that we should be waiting at 16:00.

About Friday lunch time our line handlers arrived. Each boat needs four crew to feed the long lines in or out during the lock transits so Heidi was joined by Wim and Elisabeth, our friends from SY Bengt and Tobias from SY Maya. Bengt transitted last week so were our experts and Tobias was doing a reconnaisance for his transit next month.

Just before four we moved out to “the Flats” (the agreed location) and made fast to the french catamaran “Iroise” for coffee and cake. French, swedish dutch, german and british were all sat around waiting for the canal pilot to arrive. A pilot boat arrived about five thirty with three young pilots and within minutes we were off heading under the Atlantic Bridge to the flight of three locks at Gatun. There was already a huge ship in the the lock and two tugs behind it. We made fast to Iroise and an american boat did the same on the other side and then the three of us motored in to the lock. As we entered ropes were thrown across from the walls which we attached to our long mooring lines so that the “pack” of three vessels could be securely attached.

With the lock gate shut behind us, the water began to rise and the line handlers earned their “Artemis pizza” as they pulled them in to keep everything tight. The lead pilot – on Iroise – was having a bad day and managed to get every one spooked but our pilot Miguel was totally cool and got us through all three chambers safely. It is a bit “worrying” trapped in a concrete box with a huge ship and lots of water flowing around but our line handlers worked perfectly, the workers do this every day and it all has a system

After the Gatun locks, we entered the lake and motored through the darkness until we reached a huge buoy where we made fast for the night and celebrated our success. Luckily there was no rain during the night which was good because, with the boat full of guests, we had to sleep outside in the cockpit.

Saturday morning, after breakfast, the pilot boat brought David, our canal pilot for this day. We motored about 25 miles across the Panama Isthmus meeting a constant stream of ships coming the other way. Occasionally we were instructed to stop when a gas carrier came as they have absolute right of way. Unsurprisingly, every one wants to get these mobile bombs out of the canal as soon as possible. Heidi once again proved that Artemis is a top restaurant with delicious Lasagna served in the cockpit. We crossed the Gatun Lake and a long cutting which led to the first lock of the day – Pedro Miguel. In daylight you can see far more and appreciate how truly monstrous the container ship is that followed us in. Locking down was stress free with three happy pilots directing proceedings.

A short motor took us to the last lock – Miraflores – which dropped us all the way down to the Pacific and back in to salt water. By now every one knew the drill and Heidi commented “This is fun. We could go up and down all day.” We dropped the pilot off once we were out of the channel and Wim took over the navigation and brought us safely through the dark anchorage and to anchor next to Bengt with the Panama City skyline as a backdrop.

About twenty four hours after starting, we were in the Pacific and set for our next adventure.